I'm More of an Atari


Actually, I guess I should probably thank my parents for not letting me get what I wanted.  Damn them for being right!  And getting me to admit it in adulthood (after being told some day I would understand)!  Well played, parents.  Well played.
Posted by Spiffy Riki at 1:06 PM No comments:

I have never really gotten into the superstition of Friday the 13th.  Oh, sure, I tried to act like it was some magical day where black cats and bad luck rule all, but I never actually cared.

Today, in fact, is my mom's birthday!  She was born on a Friday the 13th, so it's hard for me to think it's a bad day.  Strangely enough, my dad was also born on a Friday, so it happens than whatever day of the week Mom's birthday falls on, Dad's will, too (though, not until September).

Anywhoozles, I'm sure some of you are superstitious about this day, even if I'm not.  I'm not saying I'm never superstitious.  I am.  It's just certain things I'm superstitious about and I've gotten less superstitious as time has gone by; or maybe my medication works better and I'm just less obsessive...  I don't really see anything wrong about having superstitions as long as they don't interfere with your day to day life.

There is a fine line between being superstitious and having OCD.  Superstitious is not wanting to step on cracks in the sidewalk and cringing when you do.  You later attribute some bit of "bad luck" to having stepped on said crack, but life goes on.  OCD is feeling like stepping on a crack might mean the end of the world as you know it, and if you should happen to step on one, you may feel the need to start from the beginning or even to go home and crawl back into bed because today clearly is just not happening.

Growing up, I thought some of my quirks were just superstitions.  And some of them probably were.  But some of them were definitely bordering on obsession, and even though they didn't necessarily interfere with daily activities, they sometimes came close.  Or, at minimum, they made me think I was pretty effing weird.

Whenever we drove somewhere, I would stare out the window from the back seat.  Any time there was a driveway or a cross street, I had to keep my teeth apart.  So, picture me riding along in a residential neighborhood.  It probably looked like I was chewing gum, since I was opening my jaw (but not my mouth) for each "interruption" in the road we were on.  Not life-changing, but odd.

There were others, but those are the two that stick out most in my mind.  I used to do the typical little kid superstitious things (holding my breath past a cemetery, for example), but beyond that, none of my superstitions were as... common.  A touch of OCD will do that, though.

I hope you all have a lovely Friday the 13th today!  I'm done working in about an hour and will be spending most of my day doing homework, but here's hoping y'all have better plans than I do!  And remember, superstition ain't the way.  ;-)

EDIT: So, it turns out my mom wasn't actually born on Friday the 13th, she just happens to have a lot of birthdays on Fridays.  Oh well.  Still not an unlucky number for me!

I have a knack for getting people pretty good (if sometimes quite random) gifts.  I pick up on what people like and do my best to find something that I think they'll enjoy.
My hubby's probably the easiest person to shop for (in my world, anyway).  I'm pretty good at getting stuff for my bestie and my sister (at least I think so; let me know if I'm way off, ladies!).  At minimum, I put a lot of thought and effort into giving presents because it's one of my favorite things to do.  Honestly!  I have more fun buying gifts for other people than I do shopping for myself.
Unfortunately, there are two people in his world that I always have problems buying things for: my parents.
Let's get some background, shall we?  Mom is a part-time physical therapist who works with small kids (infants to about 3 years old) in their homes.  She loves playing puzzle games on the computer (last year I got her hooked on Pogo) and is probably the nicest, most patient person on the face of the planet.  She loves spring (gardening is one of her hobbies) and on nice weekend afternoons, you're likely to find her on the front porch with a drink in hand.
Dad is a traveling sales representative (he pretty much covers the good ol' Midwest) who isn't happy unless he has a project to work on or something to fix.  Since he travels so much during the week, he spends most of his weekends at home with Mom.  He has a dry and somewhat twisted sense of humor (he loves Family Guy), is a history buff, and the first thing he'll probably do when he retires is get a dog.  He's right next to Mom on the porch on those nice evenings, drink in one hand and cigarette in the other.
So, you'd think with even that much to go on, that gifts wouldn't be too difficult, right?  Wrong.  So very wrong.
Mom already has everything she needs for gardening, and has access to all the computer puzzle games she can ever want.  Dad can be hard to read sometimes, but for the most part, it's a good bet that if he really wants something, he either already has it or Mom will be getting it for him.
My mom's birthday is coming up next week, but we're going to see her this weekend, so we decided to celebrate early.  For the past two weeks, I've been scouring the internet for something that says, "Hey!  Your mom would love this!"  No such luck.  Spent a long time at Target the other night; got a bunch of stuff, but the only thing for Mom was a card.  Crap.
With time running out, I turned to Pinterest.  I figured either I could find a gift idea or there would be a craft I could work with, so I searched.  And searched.  And searched some more.  And eventually, I found something that looked fun and easy.
So, in all its nerdiness/goofiness, I present to you, the Bucket-O-Sun! 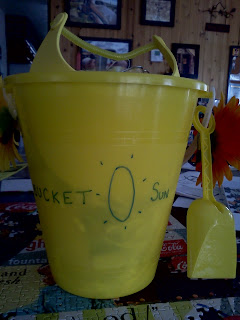 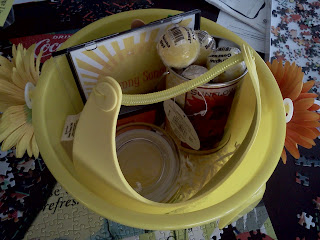 Inside this bright yellow bucket are a bunch of sunny gifts.
There are also some coasters with suns on them that will go in the bucket, but they're still in transit (c'mon, UPS!!).
OK, so it's sorta lame, but I spent HOURS trying to figure out what the hell to get her, and this is way better than nothing, right?  Let's hope...
Anywhoozles, to my mom, happy early birthday!!  To everyone else, happy early Easter!  May the bunny be kind to you all. :)

Edit: For those curious, this is the box of sunshine idea I saw.  Yeah, I butchered it pretty bad, but it's my present, dammit!

My Friends Have Blogs!